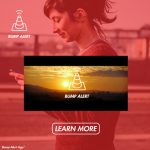 Volkswagen up! has a new feature – City Emergency Brake – that pulls the brakes for you in critical situations. But how do we get the attention of the young target on this, when they’re constantly distracted and fixated on their phones?

We started by shooting a video that told the world about a mobile app called Bump Alert. The app was intended to notify you when it registers a dangerous obstruction on the street. Of course, this was too good to be true and the app was a fake. The promo-video was linked to a website, where people learned that, while Bump Alert did not exist, City Emergency Brake was for real and you could try it out by registering for a test drive of the new up!

As part of the Bump Alert launch, we also created a citylight that signals when you come too close. Not only it saved people from bumping into it, but it also caught them in a real-life situation, where a QR code took them to the website of Bump Alert.